Stringhalt is characterised by a change in hind leg gait where there is exaggerated flexion of the hind legs when moving. Either a single or both legs are affected. Occasionally the front legs or other parts of the body may also be affected, such as the larynx, which can lead to problems breathing. The gait is often more noticeable when backing and turning of the horse. 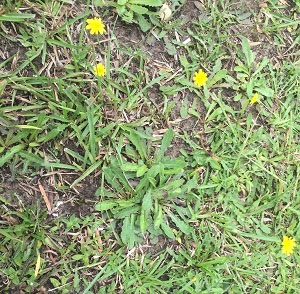 Stringhalt in Australia and New Zealand is most commonly caused by grazing Flatweed (Hypochaeris radicata)- (pictured above), although other weeds such as Dandelion have also been implicated. The symptoms are caused by damage to the nerves that run to the affected area. It is not completely understood what portion of the Flatweed causes the symptoms, but it is thought to perhaps be a mould that grows on the plant.

Apparent outbreaks of Stringhalt can occur, often after a drought and overgrazing of pasture where flatweed occurs.

Occasionally a Stringhalt like gait can be caused by direct trauma to the nerves or extensor tendon of the back legs, often several weeks or months before the symptoms develop. This should be considered in cases where there is a history of trauma to the legs and where pasture conditions do not support growth of flatweed.

The most important management practice is to remove the horse from access to the pasture. If this is not possible horses should have free access to forage such as hay to reduce the time they spend grazing causative pasture.

Many cases will resolve without treatment, however it may take weeks to months for symptoms to resolve.

Various medications that slow nerve conduction have been used, and these will reduce the symptoms whilst the horse is on the medication but may worsen with cessation of the medication.

Supplementation with Vitamin E, Vitamin B1 and Magnesium have also been reported to reduce the severity of symptoms of stringhalt.

Surgical procedures have been described that may improve symptoms on severely affected horses.

If you suspect your horse may be affected by stringhalt contact us to discuss the best management for your horse.