Felix the cat was one of our adoption kittens….

Earlier this year Felix was not weight bearing properly on his left front leg.

On examination it appeared that he had managed to tear the muscle that normally attaches to the top of his elbow off its attachment point. It is not certain how he managed this uncommon injury, but perhaps he slipped as he was jumping up onto something during one of his many adventures. 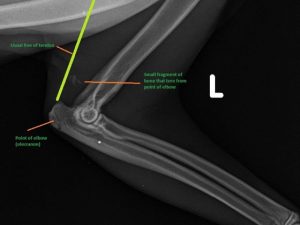 Brave Felix underwent a specialised surgery to re attach the tendon to a small hole drilled in the bone on the point of his elbow. He then needed to have a splint applied to his leg so he could not bend his elbow and was on strict cage rest for 6 weeks (in the opinion of both Felix and his mother it was a very looong 6 weeks!) but Felix was an absolute champion throughout the whole process with many bandage changes and examinations.

Fortunately for the very lucky Felix the injury has healed well. He is now back to normal with his usual role of patting his human parents on the face for breakfast at 5 am!